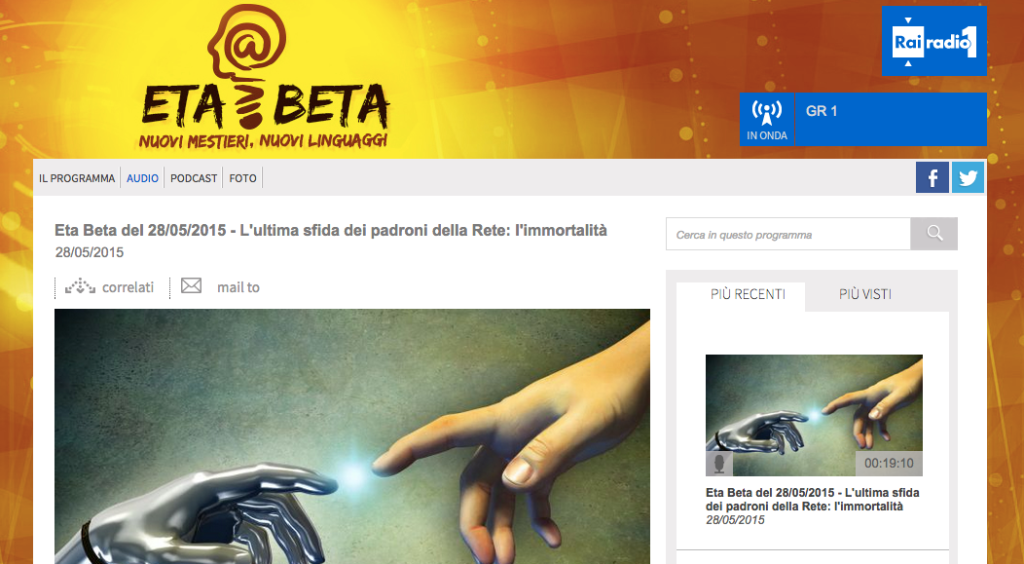 The radio transmission Eta Beta of RAI Radio 1 conducted by Massimo Cerofolini talked about transhumanism in the episode entitled L’ultima sfida dei padroni della Rete: l’immortalità (The ultimate challenge of masters of the Web: Immortality),aired May 28, 2015. I talked, interviewed on Singularity University, on the radical life extension and the mind uploading.

Massimo Cerofolini: We interviewed one of the members of the faculty of Singularity University, which is the academy created by Ray Kurzweil, and funded by Google’s founders to develop the enhancement of the human being thanks to technologies. Hear what David Orban told us, who besides being one of the teachers, he’s also a creator of innovative startups, both in Italy and in the United States.

David Orban: Singularity University was founded by Ray Kurzweil and Peter Diamandis to study, analyze and teach how technologies that accelerate in their impact are applied to improve everyday life for as many people as possible. It attracts students from all over the world: since last year Google in particular has decided to give scholarships to all those who come to the Singularity University that used to cost 30 thousand dollars. The only barrier that remains is that of talent. We have many Italian students, too.

MC And among other things, a way to approach the knowledge is to break the mold of traditional universities and try to mix the skills of disciplines completely different from each other …

DO We change radically every year what is taught and how it is taught so we can keep up with the innovations that come from pure research to the possibility of application of products and services in the world of startups. So that the students can then apply what they learn to improve the lives of a billion people or more over 10 years or less.

MC Well, let’s get a bit in the laboratories of this particular university with the participation of students and designers, humanists, a bit of everything. Let’s get in the laboratories that are studying the problem about dealing with aging. What kind of actions are done?

MC Then there are the researches about nanotechnology, genetic engineering … what are you doing about these?

DO Biotechnology getting digitized. And today, for example, the cost to perform the DNA sequence of a person is radically decreasing, and then it is applied in increasingly diverse fields. Nanotechnology, which is the study of the possibility of engineering objects on atomic scale, is something that starts to go beyond the chemical industry and begins to show the possibility of creating real microscopic robots. And then you’re coming to the possibility of applying for example sensors that live with us, which keep monitoing for example people suffering from diabetes, the insulin content of blood in real time instead of annoying and complicated withdrawals. This is just one example of the opportunities that are coming.

MC But the most problematic part of the research of the Singularity University and the transhumanist movement in general is linked to brain research. The fact that our brains can be scanned, downloaded and uploaded on a computer. Tell us a bit of what’s going on.

DO Artificial intelligence (AI), as a field of research, is always paired to the intelligence augmentation (IA), of how these computer systems allow us to think better and work better together. As I can go to Wikipedia or Google to do some research in real time, I can quickly assemble a base from which to solve my problems. Today, the research we do is done on our computers or mobile phones, but tomorrow instead of being external, these objects could possibly be inside the body, inside the brain. Communicating with the Internet, with the cloud of solutions and responses in real time, with the power of the brain, of course we need to ask some important questions.

MC For example you could create a clone, because I fully download my brain with all the emotional part, and create a consciousness like mine, maybe that works somewhere else, maybe on another planet …

DO We are still far from the possibility of carrying out an operation of this type. Today we live a unique life, tomorrow the backup will allow me to deal with adventures that today I wouldn’t do because the risk of death would stop me. I’ll know I’ll be able to restore my identity, or I’ll be able to live parallel lives and then meet with my selves and integrate the experiences I lived in parallel into a more traditional stream of consciousness.

MC In the transhumanist movement, some say that in the next twenty years human lifespan will be extended to 140 years, some say 7 thousand, some dare to say that we will overcome death. Realistically, in the next 20-30 years what can we expect from these technological improvements?

DO Realistically, no one in the next 20 years will have a biological age of 7 thousand years, or even 150. From year to year we will see what impact this research will have, and society must open a deep and robust conversation, that is not starting from dogmatic positions but from an honest and open dialogue, to find the right answers.