Big data applications in healthcare and epidemiology are very promising, if they can overcome regulatory obstacles. As it is always the case, a lot of the value that can be gained depends on the ability to interpret the data that is being collected. Finding patterns, and deviations from patterns is the best starting point for being able to ask interesting questions, like in this guest post by Roberto Vacca analyzing some surprising trends in cancer mortality comparing countries with long life expectancy like Italy, Japan, and Switzerland.

Many thousand years ago humans had an average life expectancy at birth of about 20 years. In the last two millennia in many world regions life expectancy has increased by a decennium. In  the last century, after the discovery of vaccines and antibiotics, and the drastic decrease of infectious ailments, mortality markedly diminished. In 1900 average life duration in the world was of 41 years; in 1950 of 53 years and in 2010 of 67 years. In the last ten years average life duration  in developed countries grew to 80 – in Africa it went from 40 to 67.

The situation is improving. As age advances, though, the defenses of our organism become less efficient and degenerative processes are more frequent. Consequently mortality caused by cancer increases in countries where longevity is higher.

Many factors may favor the onset of new tumors: genetic heredity, ionizing radiations, chemical agents, viral infections. Other factors as smoking, obesity, overconsumption of alcohol and drugs, are more present in richer countries. The following table shows for the world: data on population, longevity, deaths/year and cancer mortality. 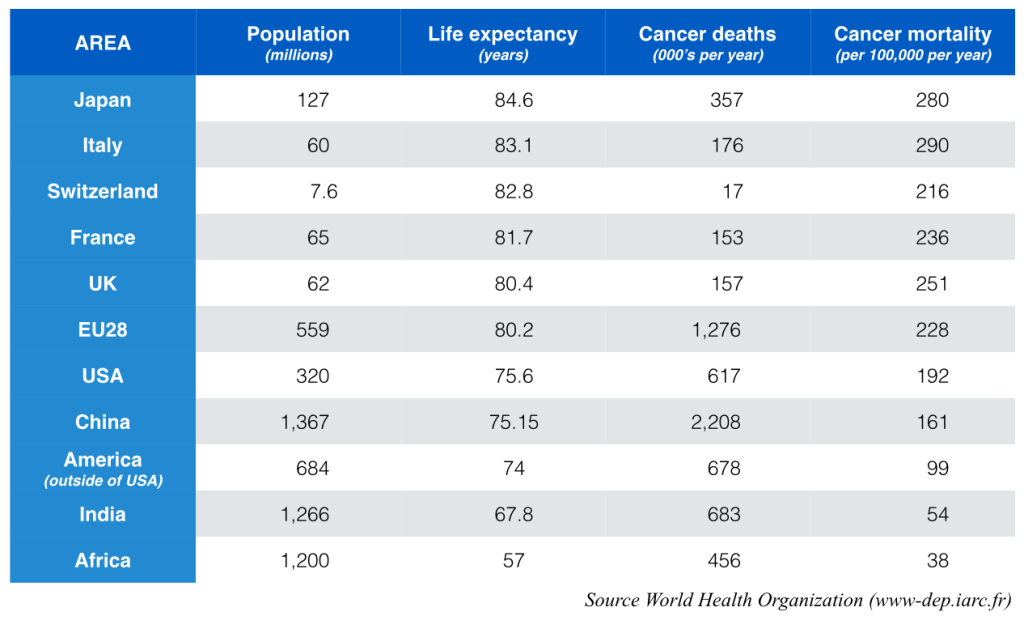 In countries where life expectancy exceeds 80 years, cancer mortality is higher than  200/year for every 100,000 inhabitants. Cancer mortality is lower in countries with lower longevity. The correlation between the 2 variables is of 97.2  per cent. Cancer yearly mortality grows with age: up to age 50 it is of a few dozen victims for every 100,000 population, then at an advanced age it reaches 2,000 – 3,000/100,000 inhabitants (i.e.  2 – 3 %). Cancer mortality increases by a factor of 5 from our 7th to our 9th decade of age. In the same age differential the mortality due to cardio-vascular causes increases by a factor of 8.

Italy has the highest mortality due to cancer in the world and it grows (slowly), followed by Japan on its way to surpass since growth is faster. Paradoxically in Switzerland, where affluence and longevity are high, cancer mortality is decreasing.

It is well known that cancer is not a single disease. It appears in many different forms. Statistical abstracts, though, consider it as a single cause of death. I have analyzed for different countries the trends of cancer mortality and found that these processes may be accurately described by means of Volterra equations. I have defined an algorithm to identify the equations of the corresponding S-shaped curves (termed “logistics”). Growth is initially slow, then it speeds up so much that it looks like an exponential. Then it slows down and it aims at a constant value – the asymptote. Epidemics mortality also varies in the same way. This empirical analysis does not identify causes and effects, but it permits to project forecasts which are highly accurate as long as no discontinuities appear. When discontinuities do appear, attempts have to be made to identify their causes. 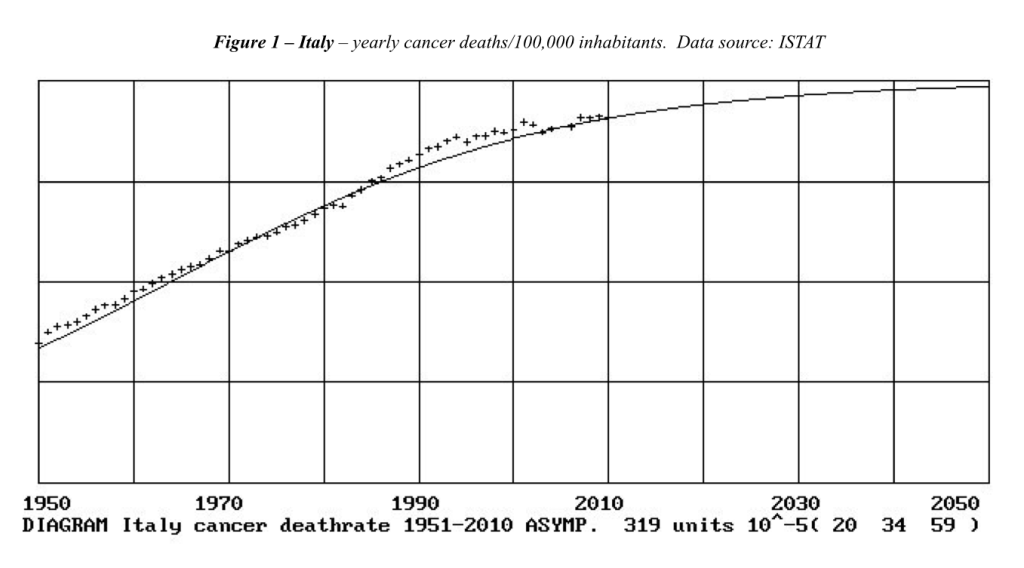 In 1983 cancer caused yearly mortality in Japan was of 147 per 100,000 inhabitants and it was on the increase aiming at 182. From 1983 to the present the process is accelerating (as shown by the faster growing continuous curve in Figure 2) and it aims at 388/100,000 inhabitants (i.e. at 495,000 deaths per year). Said value should be reached at mid century – although life expectancy is also growing. 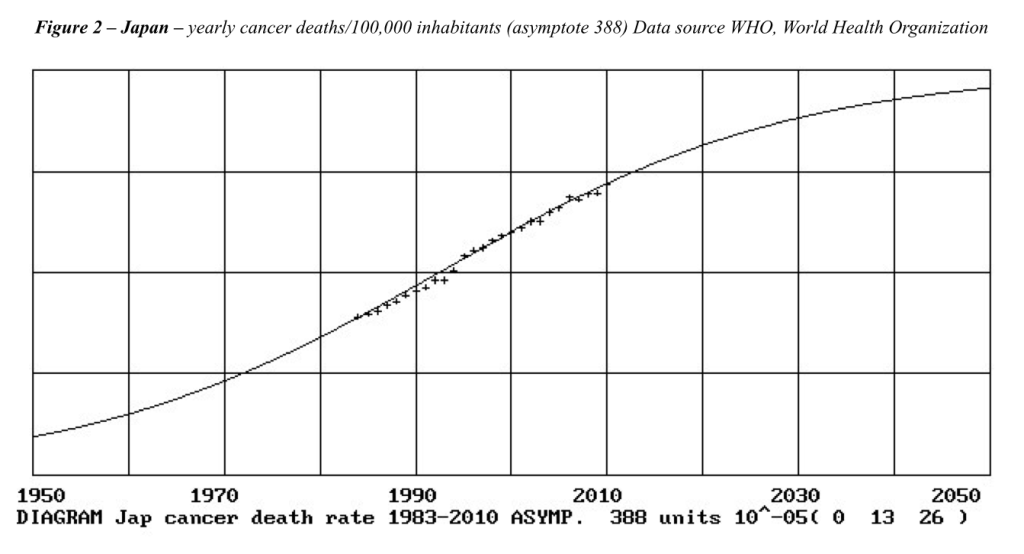 In Switzerland since 1985 cancer caused mortality, which was at 259 per 100,000 citizens in that year, has been decreasing. In Figure 3 the curve corresponding to the equation, indicates that from the current value of 216 it aims to go down to 130 at mid century (decreasing from 17,000 to 10,000 deaths per year). 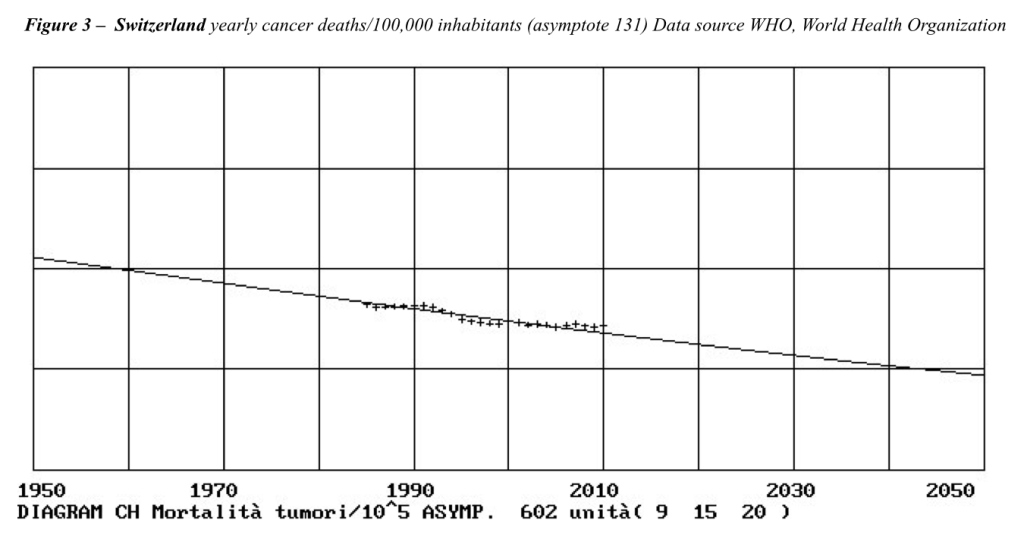 It appears there are no simple nor obvious explanations of this trend favorable to the Swiss – and so markedly different for the trends which are unfavorable to Italians and Japanese. It will be worthwhile to investigate in order to identify  the factors at the root of this disparity.

The first hypothesis to be tested is that the data be warped because different countries use different procedures for analysis, diagnostics or recording. The hypothesis that the Swiss may be favored by their genetic endowment appears to be improbable since their population does not present a marked ancestral uniformity. It will be necessary to analyze the environment, dietary habits, behaviors, presence or absence of certain substances  in construction materials, in natural or man made emissions, in medicines. This type of research may hopefully  identify new directions for health policies  and norms.