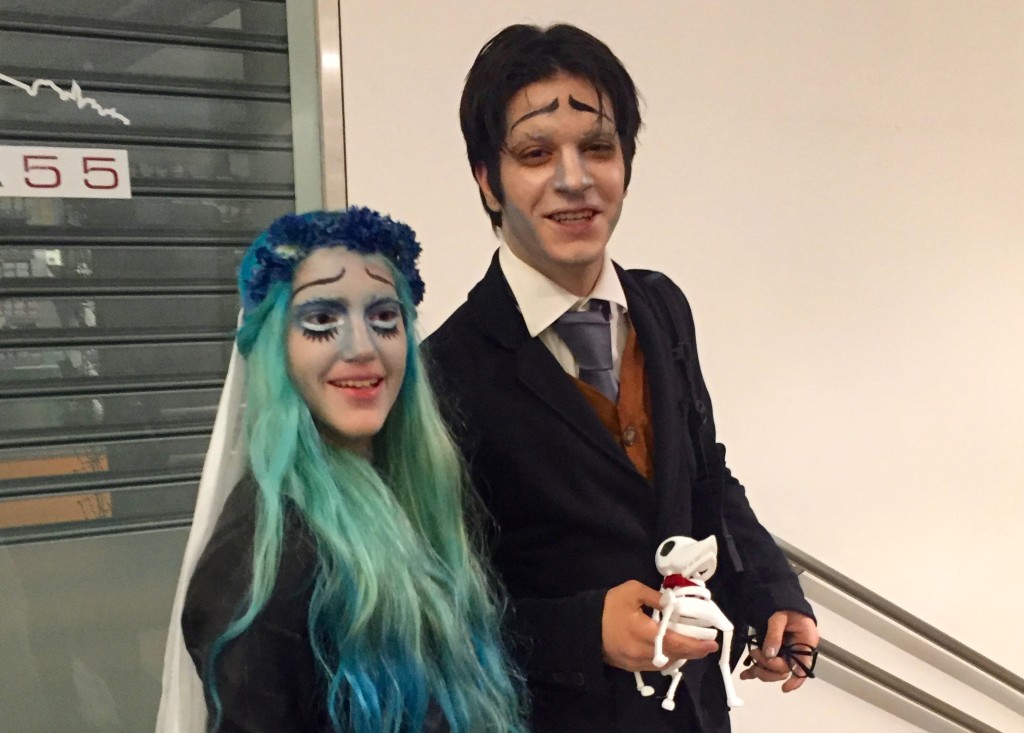 My daughter, Giordana, 15, and her boyfriend, Emil, 18, wanted to go to Lucca Comics. A couple of mistakes turned their trip into a day-long adventure involving trains, police, banks and a lot of laughter. With the use of common sense, empathy and technology, they went through the challenges of the day unscathed and learned quite a bit about how to navigate the world of humans. Here is the tale…

Lucca Comics is a huge affair, involving about 300,000 people over 4 days, transforming a charming medieval Italian city into the world capital of comics, cosplay and all kinds of fringe cults. It is all in good spirit, with young and old fans converging from everywhere. Since we were leaving on Sunday for a week-long trip to Seoul, South Korea, and she didn’t book a hotel a year in advance, we agreed to make it just a day-trip. 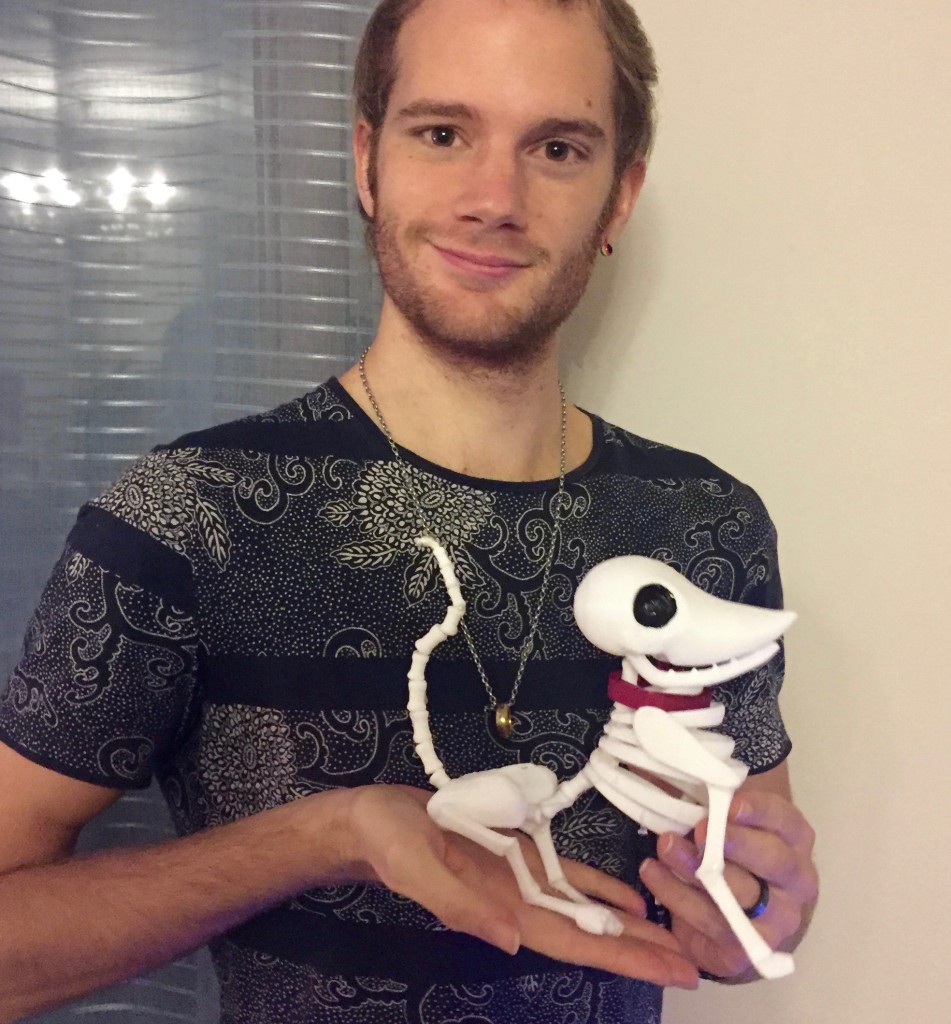 After a long preparation by her mother Diana of a fantastic Corpse Bride costume, including 3D printed scraps created by her brother Cosimo, and an early rise at 4:30 a.m. to put on makeup, Giordana and her boyfriend Emil took the train at 6 a.m. from Bergamo. Going through Milan, and Florence, a couple of changes of trains later their arrival in Lucca at 10 a.m. gave them six hours to tour the city before taking the train back at 6 p.m. to arrive back in Bergamo at 10 p.m.

Mistake 1: a few minutes after taking the train she calls to tell me that they have no money because they left their wallets at home. Ouch! Not eating or drinking for an entire day? That’s uncomfortable, but not life-threatening. I told them that they can drink at public fountains or ask for tap water at a bar. I also told Giordana to install Paypal, sent her €20 and suggested that she search for geeky-looking people, send them money on Paypal and ask them for cash in return…

Mistake 2: I bought the train tickets for the wrong day. We were debating which day they should go and the wrong date stuck in my head. They were thrown off the rapid train Frecciarossa in Bologna.

I booked a ticket for the next Frecciarossa leaving in 20 minutes using a cool service called Wanderio. I have used it in the past as well. It is the only service I know of that not only compares flights, but also trains when searching for the best transportation between two cities. Except this time it turned out to be the wrong choice. They confirmed the booking, and I told Giordana and Emil to hop on the train and wait for me to email them the QR code for the reservation, which never came. What arrived instead was a laconic email from Wanderio saying that unfortunately they had to cancel the booking and refund the ticket.

So the kids were once again without ticket, and this time not only thrown off the train in Florence, which was the first stop, but given to the police for identification, which they didn’t have, so that their fine could be sent home.

In the meantime I wrote back to Wanderio to complain and they apologized blaming the Italian train company’s systems. When I told them that it was an unacceptable excuse, they graciously admitted their mistake, and offered to pay the fine. Well done, Wanderio, and I hope in the future you will stop selling tickets that you can’t deliver.

Imagine the police with a 15 year old girl in full makeup and costume as Corpse Bride, together with an 18 year old Romanian guy, also with no documents. (Romanians are often the target of racial prejudice in Italy, blamed for petty crimes and violence.) The police called me and asked if they should keep her or let her go. I said it was all fine and sent them an email with my ID, her ID and confirmation that it was OK to let them leave.

While this was happening, I was also in touch with my bank, UniCredit, to tell them that I wanted their Florence bank to give my daughter €100 cash, with her not being an account holder and not having any ID. Of course they said I was out of my mind (not in those words) but complied. Here is the other scene – isn’t it great? Two cosplay characters walking into a bank, asking for some cash and getting it! Good job, UniCredit.

At that point it was already 1 p.m. I called them with Diana and Cosimo on speakerphone and was completely unable to stifle my laughter as I asked them what was going on! Getting to Lucca would have meant spending maybe an hour before having to catch the train back. I told them that if they wanted to have a nice lunch in Florence, warm up and then come home, it would have been all OK. So Giordano bought herself a pair of shoes and a dress to switch out from her high-heels and costume. Logical!

At the Chinese restaurant they miscounted the total of the lunch and were a few euros short paying the poor owners who didn’t know the rest of the story, but probably looked at them and felt it was wiser to drop it.

The return ticket wasn’t for the right date, but even if it were, it would have been for a different route than the outbound leg. I bought a couple of tickets on the Frecciarossa bullet train on the Web, this time on Trenitalia’s site directly. They were in first class, mingling with the high-brow Italians coming back to Milan from meetings in Rome or Florence at the end of the day. They arrived at 10 p.m. in Bergamo, tired and laughing about the mishaps of the day.

I alerted the various Facebook friends that I asked for local help in Florence that it was all OK in the end, with me picking them up at the train station and feeding them a bowl of hot soup.

To me, the moral of this story is simple. With common sense, technology and a sunny outlook on problems that are adventures rather than tragic enemies, you can really face challenges with smiles, laughter, and friendship. Giordana and Emil will also remember it like this, for years to come.