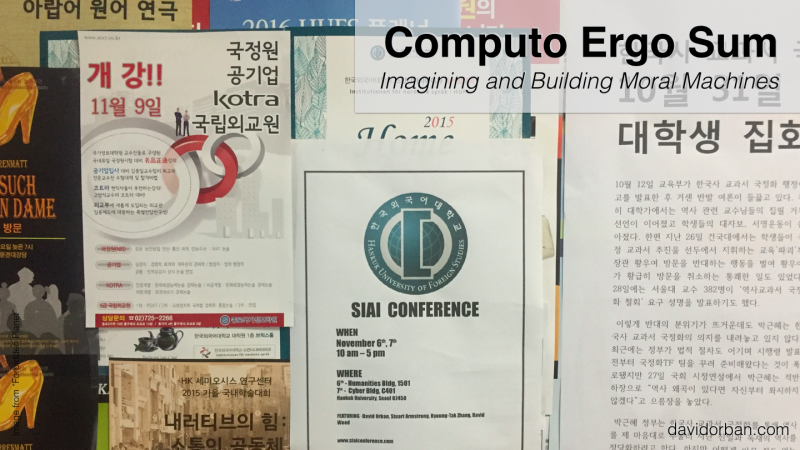 Our lives are shaped by smarter and smarter machines, helping us in big and small decisions. Corporations are busy developing products and services based on artificial intelligence. The moral implications of this symbiotic relationship must be deeply explored. A wide and inclusive public conversation is needed to address the issues they are raising.

At the recent conference “Social Implications of Artificial Intelligence” in Seoul, South Korea, I gave a keynote speech addressing some of the issues of autonomous systems with sophisticated AI decision making. The conference was expertly organized by Shuba Gokhale and Hema Gokhale at the Hankuk University of Foreign Studies.

The development of new products and services, such as self-driving cars by Google, Tesla and others, is going create very positive effects, saving literally millions of lives. It is an unstoppable development that is going to receive wide support from the public and policymakers. The traditional trolley problem, well known in sociology circles, that makes you decide in thought experiments “who should die,” can be applied to these cars as well. Certainly they will sooner or later find themselves in exotic situations where there are no good choices to make, only less bad ones. These thought experiments are important not because they represent common real situations, but because they allow us to explore the boundary conditions of the technologies that we are going to deploy widely.

But without resorting to extreme examples, the daily activities of more and more complex systems have implications that we can interpret as moral decisions, or at least nudges by algorithms in a given moral direction. In our not-too-distant exponential future, we will automate our corporations, connect smart cities with the Internet of Things, rethink banking on the blockchain and trigger autonomous decentralized organizations.  As this unfolds, we have to promote transparent, accountable and interoperable platforms that verifiably correspond to our short and long term moral desires about our lives and the development of our societies.