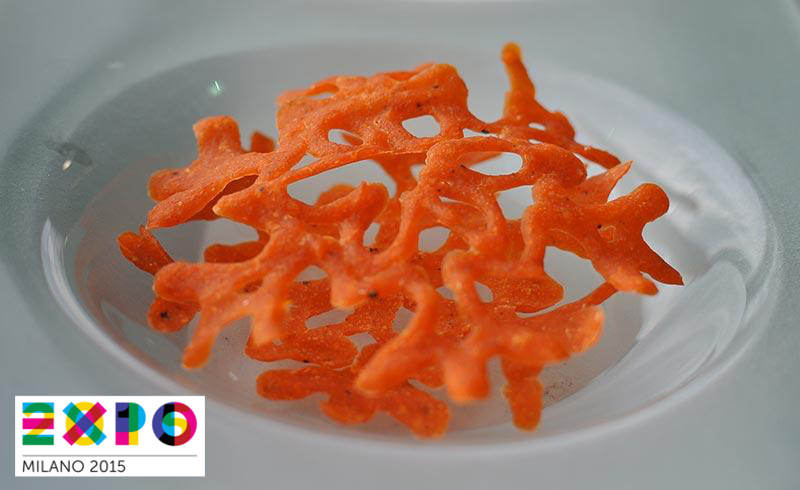 What, why and how you eat is going to change radically in the next decades, based on technologies that originate from the innovative manufacturing processes of 3D printing.

The application of the exponential power of 3D printing from manufacturing to food is digitizing and democratizing the access to high quality, dependable culinary experiences turning an exclusive and unscalable approach into a new exciting base for nutrition that is going to benefit billions.

3D printers are various types of computer controlled machines, that deposit a structure in a volume of space at high precision, similarly to traditional printers using ink to deposit two dimensional shapes dependably on paper. In the last few years there has been an explosion in the variety of 3D printers available, and in their applications, as the prices dropped from hundreds of thousands of dollars to a few thousand, or even to a few hundred dollars for the most basic models. A typical 3D printer uses electric motors to move a nozzle in a plane and then raise it just a tiny bit and execute the next series of movements as dictated by a digital design that has been appropriately sliced for this kind of execution. The nozzle itself will be fed by a material, traditionally a plastic filament, that becomes malleable through heat, and solidifies again when cooling down back to room temperature. There are different kinds of 3D printers, using also lasers and gels, and different materials. Many people don’t realize how fast their applications are spreading, and how reliable they’ve become. Boeing surprised even the experts following the field when they confirmed that in ten different plane models regularly flying in hundreds of destinations daily, there are over three hundred 3D printed parts, for a total of over 20.000 parts in production. Not prototypes, but components of a complex flying machine to which we entrust our lives.

The advantages of 3D printing a numerous. They allow rapid experimentation to iterate solutions searching for the optimal one, before increasing the number of units produced. The cost of producing a given object does not increase with its complexity, but only depends on the quantity of material used. The winning designs that are best for a given objective can be simply downloaded worldwide, and printed on local machines, eliminating transportation and distribution costs altogether.It is possible to create 3D printers, and there are several models already either in production or in prototype stages, that use edible materials, and that create objects whose use is in nutrition, to be eaten, rather than any other industrial or consumer application.We are just at the beginning of the process of applying 3D printing technologies to food. In the Netherlands an entire conference was dedicated to this topic, with presentations, machines and discussions aplenty, demonstrating how fertile the area is for experimentation and exciting new solutions.

Are you ready for your dinner to be 3D printed?

Thousands of years ago the daily chore of procuring and preparing the food that a family or a group of individuals would need to eat in order to survive would absorb a large percentage of the time available, and was an exhausting and often dangerous process. Today, for a growing number of people luckily, it is a rich, satisfying daily experience. Applying 3D printing to food promises to increase the creativity and variety of the components, processes and preparations around nutrition and eating. Imagine that the creations of the best chefs of the world are available to you just with a download. Think of a machine that considering your taste, inclination to experimentation, the companions you are eating with, prepares your plates taking away all the effort. With 3D printing of food, economies of scale, and thanks to the nature of the process being independent from the complexity of the end result, a new level of culinary art can develop and rapidly spread around the world. When plates are reliably prepared from well sourced and well controlled supplies, they can be targeted to contain the well balanced components for optimal nutrition, including the vitamins and micro-nutrients that deeply affect our health.