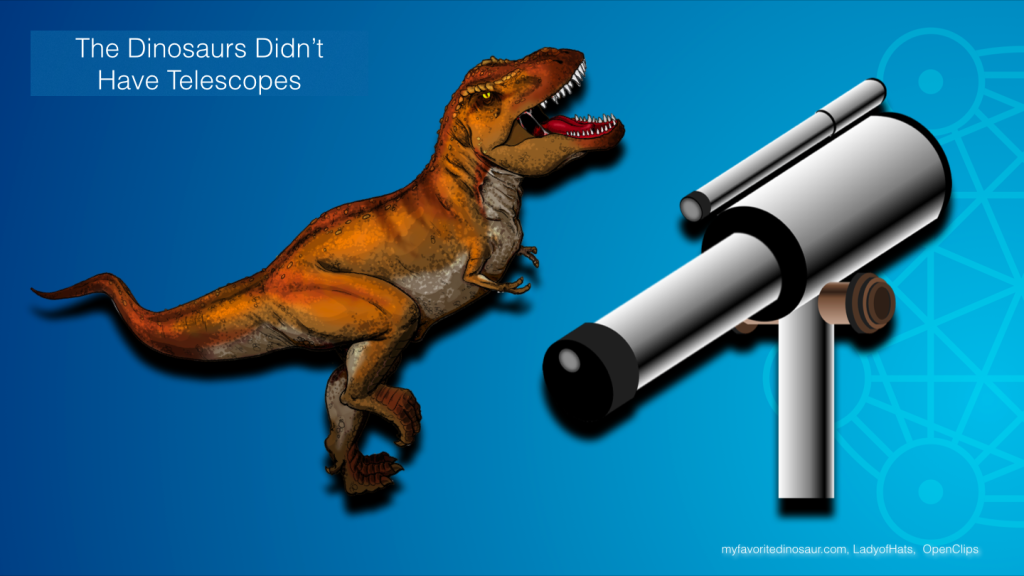 The only difference between us and the dinosaurs is that they didn’t have telescopes! There are millions of asteroids that can be fatal to humanity and we only know a fraction of them. If we want to prevent going the way of the dinosaurs, we have to get serious about mapping asteroids. More in general, using science and reason is the only tool that can help us survive.

The dinosaurs were at the top of the food chain for millions of years, but they could do nothing against the threat that at the end caused their extinction. They did not have any way to understand the menace coming from the sky, the kilometer wide asteroid that impacting Earth created the immediate and longer term changes that caused their downfall.

The opportunity that we have is significant. There have been no other species on Earth that was able to understand its environment at the extent and depth that humans are capable of. We are able to look around not only our immediate surrounding, but farther, with our augmented senses. We are also able to plan, based on our understanding of events, their causes and their effects. To try to nudge the conditions around us so that what happens next is in our favor.

And still, we have a hard time coping with the probabilities of certain risks, overestimating some, and underestimating others, leading to counterproductive allocation of resources. One of the risks that we are not understanding well enough as a species is the same that dinosaurs didn’t see coming. We have telescopes, but we are not giving them enough resources to correctly map the orbits of near Earth asteroids that could kill us all.

That is why I support the mission of Asteroid Day, and also invite you to sign the petition asking to accelerate the discovery and tracking of Near-Earth Asteroids 100 fold. We have a choice to be better than the dinosaurs.

More in general, we have the tools of reason and science to understand the world, and we have to use them. There are no other methods of discovery that can generate the consistent, reliable, and honest results. There are those who say otherwise, and predicate relinquishing technology, or blindly advocate the return to a supposed state of nature that as a species we really left a hundred thousand years ago. We cannot let them dictate the future trajectory of our civilization. It would be one as tragic as that of an unseen and unforeseen asteroid, annihilating humanity.

2 thoughts on “Are We Better Than The Dinosaurs? They Didn’t Have Telescopes”