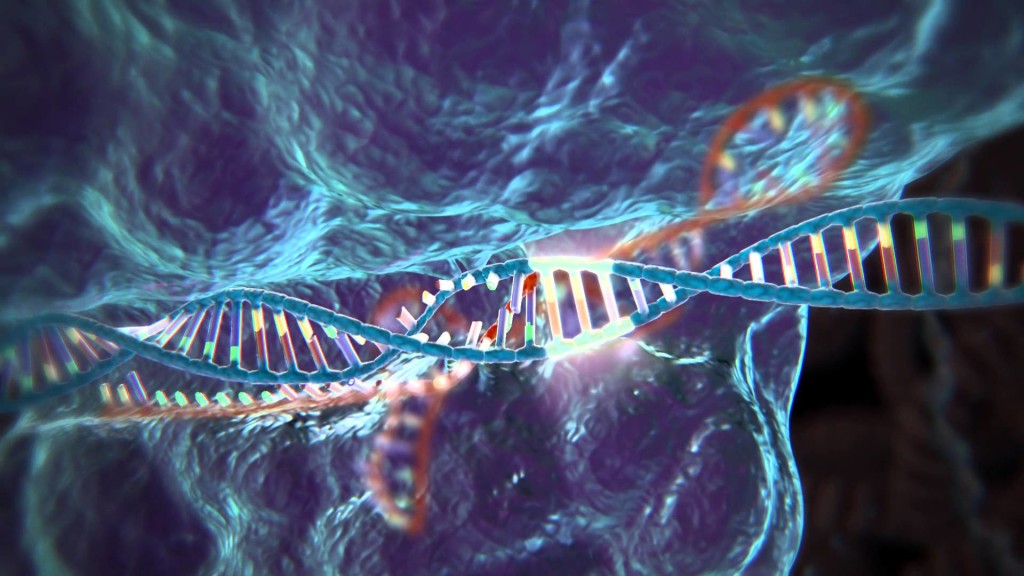 Biology is becoming digital at an accelerated pace. The latest techniques are making it possible to as easily manipulate our genes via CAG (Computer Aided Genetics) tools as designing a building with CAD (Computer Aided Design) systems. The more and more sophisticated approaches have recently been upgraded through CRISPR. A new word with which all of us will be familiar in the near future for the power and the promise of the technique. The story below was written by Roberto Vacca, an Italian engineer, and author, part of the group that wrote the original Club Of Rome report in the ’60s.

Lazar Klug was a Lithuanian Jew, a cattleman. One of his decisions was the cause of some remarkable advantages, both for humanity and Science. In 1928 he left Lithuania and emigrated to South Africa with his wife, Bella Silin, and with his son Aaron, who was two years old. Remaining in Lithuania would have, probably, meant that they would have been exterminated by the Nazis who invaded the Baltic States in 1941. Consequently Aaron studied, profitably, in Durban. He used to read a lot of books and became interested in the best selling”Microbe Hunters” by Paul de Kruif. He studied medicine at the University of Johannesburg, but was exceptionally proficient also in chemistry, biochemistry, physics and mathematics. Then he took a Master of Science at the University of Cape Town, where he studied X-ray crystallography with the famous Professor R.W. James. In 1949 he won a scholarship to Cambridge and worked with some luminaries in that field: Bragg, Hartree and Rosalind Franklin. Rosalind Franklin was the first scientist to produce an X-ray photo of the helical structures that allowed Watson and Crick to discover the DNA. She would have, similarly, deserved a Nobel Prize jointly, if she had not died prematurely.

Aaron Klug continued his studies in the field. He also found specific innovative solutions to some interesting problems relevant to the metallurgy of steels. In 1982 he was awarded the Nobel Prize in Chemistry, for having analyzed and explained the complex procedures related to the processes of interaction between nucleic acids and proteins. Not only he created an international school, but also trained and inspired other young scientists; in fact he stimulated the emergence of a whole area of science underlying the emerging genomic surgery.

In this discipline the first step is identifying the base-pair couples (the rungs of the DMA double helix) or genes (sequences of a few tens of base-pair couples) which it may be appropriate to modify or delete. The second step consists in producing a protein structure which can recognize the sequences which have been identified, and strictly adhereg to them. In the third step an enzyme is activated and cuts the sequences that have been found and “dimerizes”, that is joins together the terminals on both sides of the cut.

Klug succeeded in 1984 to produce the so-called “zinc fingers“: these are elongated structures – consisting of three-dimensional chains of proteins, including a zinc atom – which can recognize particular portions of DNA (sequences of base-pair couples or individual genes) which they tighten energetically. Initially these portions included only three base-pair couples and it was necessary to align 6 zinc fingers to block 18 base-pair couples. The identified portion of genome was cut by the FokI enzyme. Recently, instead of zinc fingers, recourse has been made more effectively to certain chemical structures such as those produced by bacteria to protect themselves from viruses. Among these there are: TALEN (Transcriptor Activator-Like Effecto Nuclease), recognizing sequences of 17 base-pair couples of DNA, and the more effective and recent CRISPR [Clustered Regularly Interspaced Short Palindromic Repeats] – a structure consisting of short sequences of molecules regularly interspaced and repeated in reverse order (palindromic)] joined to the Cas9 enzyme that cuts the base sequences of DNA.
The patent for the CRISPR-CAS9 technology was applied for by Prof. Jennifer Doudna (University of Berkeley) together with Prof. Emmanuelle Charpentier (MIMS, Swedish Laboratory of Molecular Medicine) in May 2012. However, seven months later, Prof. Feng Zhang (Broad Institute, MIT) claimed that he was the sole inventor of that technology. His notes of 2011 appear to substantiate his claim. The three scientists have created companies aimed at exploiting the invention: Caribou Biosciences (Doudna), CRISPR Therapeutics (Charpentier), Editas Medicine (Zhang). There are huge interests at stake: millions of dollars for legal fees in order to handle the dispute before the US Patent Office in April 2015.

Video by the McGovern Institute for Brain Research at MIT illustrating the CRSIPR-Cas9 technique.

Yet the names of the above mentioned complex chemical structures do not mean a lot to us. To understand how they are made, how they work, where they are in nature and how to synthesize them, a long study would be necessary .

It is an extraordinary progress: scientists are creating genomic surgery applicable to all areas of biotechnology, along with strategies for human therapeutic. It will be possible to enable or disable individual genes and change the DNA in the chromosomes of our cells. We can become immune to genetic diseases (sickle cell anemia, cystic fibrosis, Alzheimer’s, etc.) even after they have occurred. We can become immune to infectious diseases even after we have contracted them. This revolution in medicine is good news; yet there is still much to be done in order to understand how it works.
Innovative treatments are being experimented. We know that human beings, genetically lacking the gene ccR5a, are immune to HIV (which causes AIDS). Attempts are made, then, with some success, to eliminate that gene (a “front door” for the virus) in the blood of a patient with AIDS – and then to give him a transfusion of his own blood with the altered DNA: so he is made immune after the fact – he is healed. Similar procedures are attempted to modify liver cells, aiming to treat hepatitis C.

Knowing how to modify the DNA will also modify the genetic heritage that we pass on to our children. Rather than through sexual intercourse, they could be conceived in vitro, from an ovum and a sperm. The procedure, tested on monkeys by the School of Medicine of Harvard, uses stem cells, whose genes are modified by removing the portions that predispose to genetic diseases. These cells are, then, transformed into ova or sperm, and then the fertilization occurs, producing zygotes and embryos. After surgery on DNA, the unborn babies would be free from genetic defects. They may even be taller and more fair-haired than us. They may have a more developed and better connected cerebral cortex – more appropriate to resolve serious current problems. But they may also have unforeseen deviations.
In fact, the efficiency with which you can delete or block a gene in a zygote seems to be around 40%, while getting a thorough change of some single letters in DNA is even more difficult and it works as desired only in 20% of cases. So only a small percentage of embryos develops in vital infants possessing the desired features. The experiments have been carried out only on a few species of monkeys, in China and at MIT.

Obviously, the very idea of optimizing the physical characteristics of the unborn, sounds like eugenics. It calls back to memory the experiments (also horrible) which were carried out during the war by some Nazi doctors. Even several scientists at the forefront in this field argue that research and experimentation on the human genetic line should be prohibited. Among them Prof. Doudna denounces the risk that the instruments for the genetic “editing” be made widely available without adequate safeguards. Furthermore, according to Professor George Church of Harvard Medical School, it is not at all certain that a therapy, applied to the somatic genes (i.e. NOT the sex cells) of an adult, could not have consequences on his or her progeny. These could occur through epigenetic effects of activation or deactivation of certain genes. According to Church a voluntary moratorium by scientists would not be enough to avoid risks, today unpredictable, of an unwanted evolution of human beings in the future. It would be necessary to establish stringent rules and a monitoring, imposed by competent international and governmental authorities. The people involved, at these levels, should attend advanced education courses, so that the measures and the laws that they will generate can be sensible and appropriate.

John Harris, professor of bioethics at Manchester University, in his book “Enhancing Evolution” argues that our genome is defective, and that we should feel the moral imperative to improve the physical and mental faculties of the next generations. Genetic engineering is expected to improve the reasoning ability, the concentration and the memory and the reaction time of our descendants. This argument underestimates the extreme complexity and the considerable risks of such an undertaking. Even less credible is the proposal – made by somebody – to aim, by means of genetics, to the increasing of IQ for all men in the future.

It seems that private companies, operating in this field, (such as, for example, Sangamo Biosciences and OvaScience) are very cautious. Some believe, however, that very advanced and risky experiments are underway in China.

The therapeutic projects are opening up some new, wider horizons. In fact the total decoding of the genome of an appreciable proportion of the population is in the pipeline. In the United States the DNA of one million people will be decoded. In Iceland Dr. Kari Stefansson, founder of DeCode, has analyzed the genomes of 10,000 people out of a population of 323,000 – whose genealogies are known with great accuracy, even up to several centuries ago. These circumstances are making it possible to discover what are the functions or predispositions to certain illnesses of hundreds of genes, which have been unknown so far. So it will be eventually possible to devise surgery genomic strategies for entire populations. It is a medical progress that will bring widespread prosperity, more epochal than those due to vaccinations and antibiotics. In the long term our increased longevity could revive concerns due to overpopulation; nevertheless they certainly should not curb the commitment to continue on the path of progress. 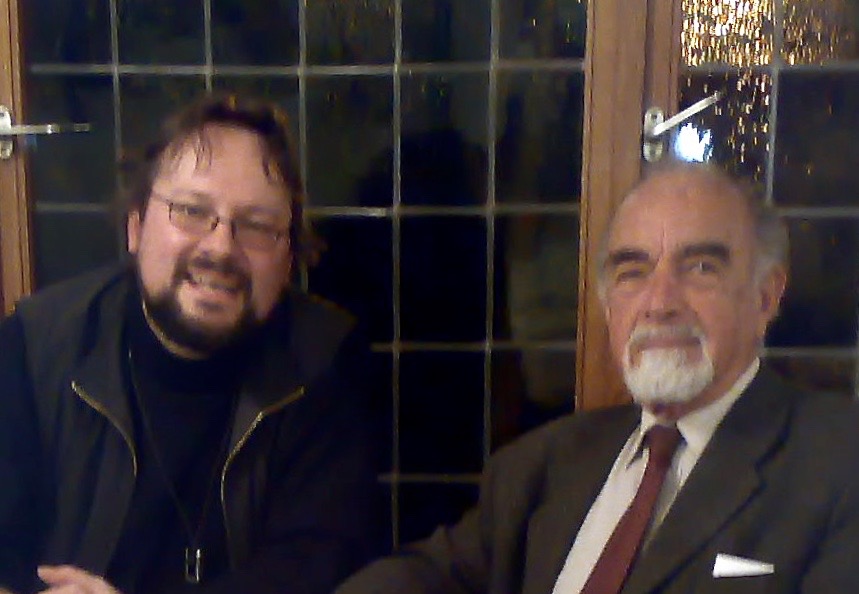 David Orban and Roberto Vacca at dinner in 2007