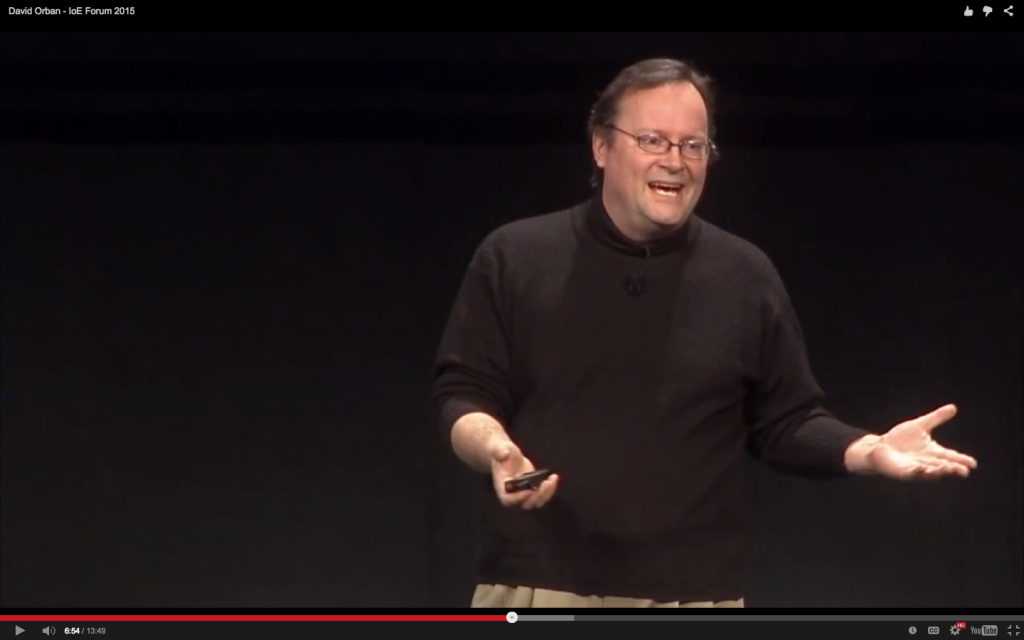 More than one hundred thousand years ago we began using fire or, more recently, ten thousand years ago, we began agricultural activities, since then our society has always been influenced profoundly influenced by technology and we have had important dreams of achieving social emancipation, of achieving justice for all. The infrastructures we have not only dreamed about, but designed, built, established at a now planetary level, are drawing a map in ever finer detail of our knowledge of the world.

The resulting emerging structures that we see developing around us day after day, the networks, the networks of networks, the Internet, the Internet of Things and the Internet of Everything, not only restore capabilities that in an ideal world we think we have lost, they also increase and extend fundamentally what we can do, offering new ways of adapting to resolve our problems in a fractal exploration, to actually find that level of adaptation and strength and robustness in society that we need in the 21st century. Each one of these steps is based on the exponential function, an understanding of which is one of the most important things each one of us can do; whether we’re an industrialist, a teacher, the head of a family, or a child.

When computers were developed, fifty, sixty years ago, they were deaf and blind. They depended on us completely to begin understanding the world and we used keyboards, we used punched cards to tell them what they could learn, what they could understand. Then they began to acquire senses, for example, they were freed from the constraint of the size of human hands, they were able to abandon keyboards and began to feel, to perceive touch. They acquired the ability to see and so can interpret our position, our gestures, our movements. And today it is becoming possible for computers not to need screens because, with improvements in voice recognition and the arrival of conversational interfaces, they will at last be able to disappear into the environment. When that happens, it won’t be the last step, since computers will go further: by connecting to anything and trying to anticipate our wants, they will make objects truly alert because, from a differential viewpoint, the cost of producing computers equipped with this artificial intelligence will be so minute that evolutionary pressure will sweep away devices that don’t have it. However, in addition to artificial intelligence, ever since computers were developed, we have also always talked about ways of supporting man, of augmenting intelligence, of working together, achieving common goals… Artificial intelligence is not something to be afraid of, it shouldn’t be seen as something opposed to us but as something that, like fire one hundred thousand years ago, like agriculture ten thousand years ago, frees us from the constraints of a world, of nature that has no interest in what happens to man and to humanity.

Paul Crutzen, a Nobel Prize winning chemist, has given the geological epoch we live in a special name, he calls it the “Anthropocene”: the geological era characterized by the presence of man on the Earth. In the blink of an eye, just ten thousand years, you can see from this diagram, the proportion of the biomass of land vertebrates has completely reversed: from what we call “wild animals”, to the sum of human beings and our domestic animals. The situation is clearly unsustainable.

But for people who preach a return to a mythical past, I have a question: is there a difference between us and the dinosaurs besides the fact that dinosaurs didn’t have telescopes? Will we make concrete use of telescopes to find the asteroid? Just the other day, an asteroid passed very close to the Earth. The asteroid that could hit us and about which so far we can do very little. And we shall use these telescopes of the mind, metaphorically speaking too, to continue the virtuous circle of science and reason, in theory and in practice. For people who say that we should go back, my question, asked with relative calm, is who are the 999 people out of a 1000 who would eventually have to die since we had a world population of a few million people, rather than the several billion we have today. Fortunately, no one can give me an answer.

The fact is our planetary civilisation has been enormously successful in the last five hundred years, organising itself through centralised and hierarchical activities into nations, into business organisations, and has developed formidable analysis, implementation and production skills. But today, thanks to sustainable technologies, we are approaching a new phase that gives a concrete advantage to the distributed and decentralised organisation of all these activities. What I call the “network society”.

Think for example about the production of solar energy which is naturally distributed rather than centralised, or about 3D printing in the manufacturing industry, which, has the advantage, of being able to uncouple the complexity of the objects produced from the capital investment, unlike the production chains of the 19th and 20th centuries. The possibility of developing hydroponic crops, urban gardens, vertical gardens and even 3D printing of meat, in environments whose use of energy, water or soil is of a radically reduced order of magnitude compared with the past, without use of pesticides. Personalised healthcare, which, by using smartphones, increasingly sophisticated sensors, makes the individual responsible for conserving their state of health, instead of intervening when it is too late. Every one of these activities is enhanced by the possibilities of the Internet of Things and the Internet of Everything. And one is targeted, perhaps by pre-existing interests, because it is labelled a passing fad, but when you see them one after the other, one next to the other, you realize that, in fact, they are part of a great wave, a deep unstoppable wave.

If that is the situation and we accept it together, the question is: what tools can we use to avoid being swept away by this powerful wave but to ride it instead? What new organisations shall we use to empower people so they can express their potential? To emancipate those billions of minds that are joining together with the one or two billion already present online? We have to learn to be advanced citizens of the Internet of Everything to play an active part, to dismantle resistance to this change, to eliminate a feeling of panic that even the experts experience because there are countless variables to be kept under control and predictions don’t necessarily come true. But when we face up to the challenge, wecan really give dignity to the people who play an active part in this new society, because only through this consolidated dignity can we hope to build new communities together. And the advantage we have is that, thanks to the modern technological tools available today, available to everyone, the distance between an idea and action really is being eliminated.

We have the ability to test, to try out such huge numbers of ideas that they represent really unlimited opportunities. And if that is the situation, then really the only question left is: “Who wants to take part?” “Who wants to be involved?” “Who wants to be a protagonist of this rapidly approaching world?”

Transcript of my keynote at CISCOLive! Internet Of Everything in Milan, on January 28, 2015