There is plenty doubt regarding the role of humans in a world soon to be dominated by artificial intelligence (AI). How can we thrive if what we currently define as “jobs” will increasingly be covered by smarter (and then even smarter) computers entering our environment, workplace, and general lives? We pondered this question back when the technological evolution appeared to displace a lot of human labor. There was a period of adaptation following the development of these technologies. Making the change was painful because society didn’t support those who needed to adapt.

This present period will be characterized by the progressive spreading of AI within our communities and economic segments. This change is not going to happen across several generations, but within the next 5 to 10 years. Be aware that this rapid change will be especially difficult to understand, analyze, and cope with. It’s essential that everyone be as nimble or adaptable as possible. We should embrace these new technologies because they are unstoppable. In a globally interconnected world, these technologies spread because they effortlessly overcome barriers. It would be pointless to try and slow them down.

I repeat: it is impossible to stop them.

We should instead embrace the possibility to experiment and test against the obstacles. The barrier to adopting these new technologies is practically zero. Everybody can understand and benefit once we view them as allies rather than enemies.

Let’s take self-driving cars as an example. Even though there are a lot of people today who have jobs driving cars or trucks, society will receive overwhelming benefits from self-driving cars. It is relatively easy to recognize that our joint enemy is not smart machines (self-driving cars) but dumb machines (human-operated automobiles). The current incarnation of vehicles kills too many people.

Similarly, in other areas of the economy, progressive automation and the spreading of artificial intelligence is going to replace repetitive tasks based on human muscle or cognition. AI replacing human muscle has already been happening for several decades. Artificial intelligence will benefit those who do not like their jobs. It will help those who do not feel fulfilled in their aspirations and opportunities.

This kind of replacement by smart automation must be welcomed. The result will be people who can aspire to do more, to do better, to be more creative. Humanity can now leverage infrastructure enabling them to create more value for themselves, their immediate communities, and society at large. 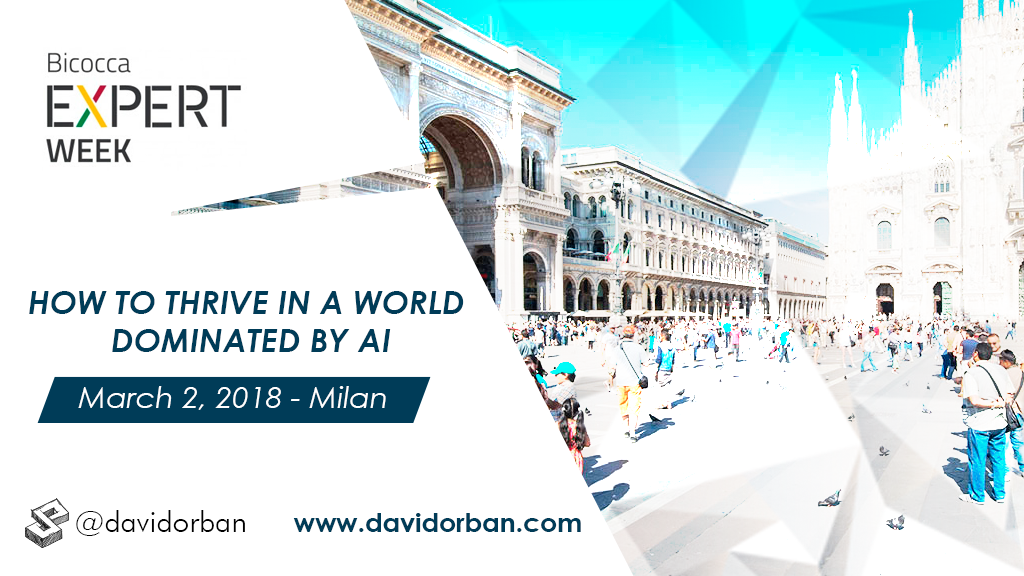 I will give a talk at University of Bicocca in Milan on March 2, 2018 about these themes. The event is free, and you can get your tickets directly from the Bicocca Expert Week page.